Spanish aircraft crashes into a car at Alicante airport

THIS WEEKEND PASSENGERS aboard a Spanish commercial aircraft had to be evacuated after their jet collided with a car just minutes before departure at Alicante airport.

The extraordinary accident happened on Saturday 24th June at Alicante-Elche international airport and involved a Vueling Airbus A320 aircraft with 153 people on board.

The plane was scheduled to make the journey from Alicante airport to Rome, taxiing away from the terminal apron towards the runway, when it collided with a stationary Peugeot car damaging the aircraft's right-hand engine.

The vehicle had been left unattended, but as a precaution the captain ordered all passengers to evacuate the jet while technicians checked the condition of the craft and its fuselage, causing a seven-hour delay.

Aviation experts on the scene said it was “extremely fortunate” that there were no injuries and pure luck that the Spanish budget plane had only been taxiing, as the slow speed avoided what could have been a much more serious incident.

Vueling: the service vehicle should not have been near the aircraft 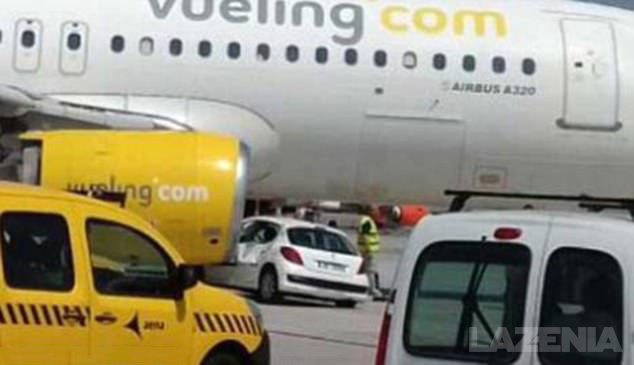 The impact damaged part of the fuselage and the engine housing, rendering the jet unable to fly, and all passengers eventually departed for their Italian destination on a replacement flight to Fiumicino.

There were a number of families on board headed for Rome for time-sensitive celebrations. Arrangements were made for them to get the next flight out.

The remaining passengers had to wait for later replacement flights. It is understood that the vehicle involved was part of the budget airline's service fleet.

Alicante airport reports that a full investigation has been opened to discover why the car was still on the runway when the plane was preparing to take off.